The first McLaren GT race car since the F1 GTR finishedproduction in 1997, the new 12C GT3 is based on the MP4-12C McLaren carbon-fiberchassis production sports car. The 12C GT3 is designed to allow any driver toreach the car’s performance limit. In conjunction with CRS Racing, developmenthas been pursued with the level of detail equal to that of an F1 car. In fact,the 12C borrows technology from F1, such as the steering wheel. Because the road car’s 3.8-liter, V8twin-turbo has so much power, it has been de-tuned for the GT3 to make it moretractable, leaving it with 539 hp. To save weight and to accommodaterace-specific gearing, the 12C also features a Ricardo six-speed sequential-shiftgearbox instead of the seven-speed of the road car. McLaren’s goal is to buildstrong relationships with their buyers, so the car will be a very limitedproduction. Demand for the initial run of 12C GT3’s was high, 20 more are plannedfor 2013 and 2014. Finally, a McLaren is back in GT3 racing! 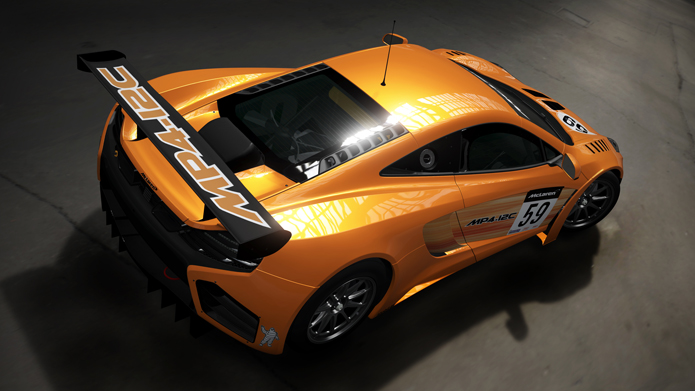 Described by AMC as “the first American-built import,” andbased on an AMC chief stylist’s sketch on an air-sickness bag, the AMC Gremlin wasa two-fold response to Japanese imports and the fuel crisis of the era. AMC did not havethe budget for a full-fledged new car to match up with Ford's and GM’s new importbeaters, so they developed the Gremlin first on a shortened AMX body andeventually a shortened Hornet. Resembling a sawed-off station wagon, theGremlin is only slightly longer than a VW Beetle, although its long hood givesthe impression of a larger car. The Gremlin had one body style that carried itthrough its entire eight-year production, with limited changes. The first twoyears of production saw a two-seat base model as well as the four-seater that wasmuch more popular. The “X” trim package came with stripes, body color fascia,slotted road wheels, and a blacked-out grill insert. While these features didnot make the Gremlin any faster--it was already the most powerful sub-compact--theydid increase appeal and contributed to a 30 percent increase in sales for 1973. 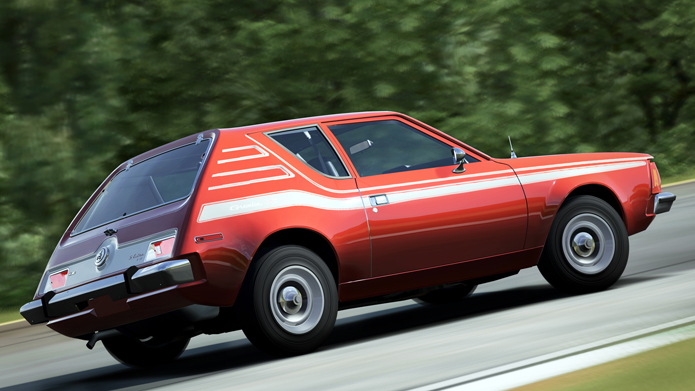 A track-tuned version of the race-bred supercar of the road,the KZ1R is capable of a top speed of 200 mph and 0-60 acceleration of three seconds. Ascari cars are hand-built on a state-of-the-art, carbon-fiber,monocoque adding to their potential as track superstars. Powered by the naturallyaspirated BMW M5, 5.0-liter V8 and feather light at less than 3,000 lbs,despite luxury appointments such as electric windows, the KZR1 delivers anintensely exciting ride. The interior is all business and stripped to the bareessentials while still providing comfort inside the built-in safety cage. Outside,the front splitter and rear-wing generate additional downforce whilecomplimenting the aerodynamic smoothness of the elegant body. Ascari will build only 50 KZ1R models so your best bet of getting close to one just might be inForza Motorsport 4. 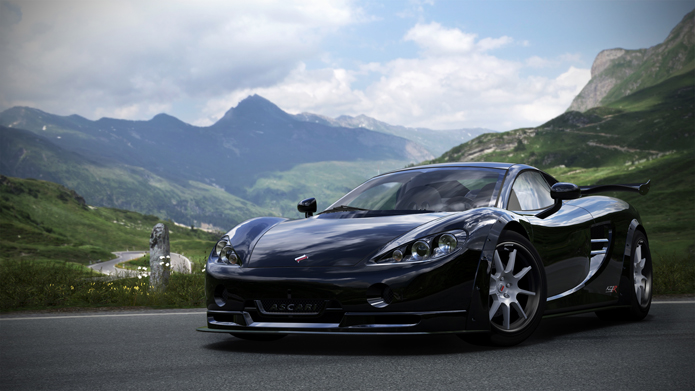 Take a luxury sportscar and then squeeze even more horsepowerout of an already chest-pounding motor. That’s what Aston Martin did with thesuper-low production Vantage V600. This comprehensive upgrade package addedtwin mechanically driven Eaton superchargers, with optimized intercooling and afatter exhaust. As a result, engineersat Aston produced 600 hp and 600 ft-lbs of torque from the aluminum-alloy, 5.3-literV8 powerplant. To cope with all that juice, ventilated and grooved discs withsix-piston, AP calipers were fitted; as well as Eibach springs and Koni dampers. Only 56 cars were built with this optionpackage; not surprising, since only a select few can afford the V600’s stunningcombination of power and luxury. 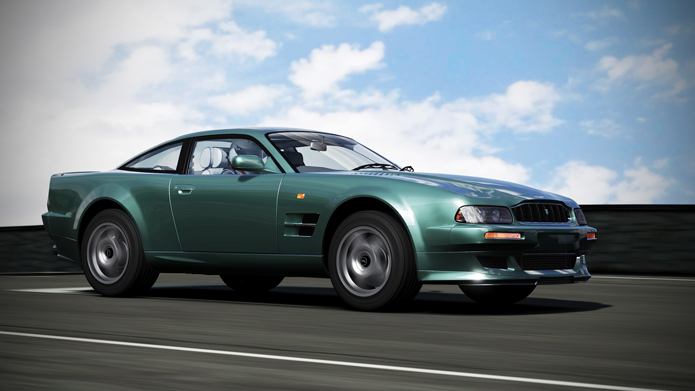 A historically profound leader in both automotive design andsports car racing, the 1952 Hudson Hornet set new standards in safety, interiorspace, and handling. It also set stock-car racing win records that would standfor decades. By mounting the floor at the bottom of the frame rails, the HudsonHornet had a lower center of gravity that contributed to handling that was aclass above its competition. Furthermore, structural rigidity and safety wereenhanced by steel girders that wrapped into the roof. In an age where V8 carsboasted about their horsepower, Hudson built a 308ci L6 with “Twin-H” power thatbrought 40 out of 48 wins in 1952. Doc Hudson, the “Fabulous Hudson Hornet” ofPixar’s “Cars”, breathed new life into the awareness of the Hudson Hornet’shistory and will naturally inspire many “Cars”-based liveries in Forza 4.Hudson produced cars until 1957 but they will long be remembered as aninnovator and race champion.

There is something about driving a Jaguar roadster from the1950s that is like riding a motorcycle. It’s freeing and exudes a carefree,Zen-like feeling when behind the wheel. The sound of the engine, the hugewooden wheel in your hands, the short windshield; they all come together in atransportive experience, an automotive time machine taking you back to asimpler, more elegant era. But the XK120 is not just slick sophistication; italso delivered refined performance and an exhilarating ride. SE stands for“special equipment” which included a C-Type cylinder head, extending horsepoweroutput to 210. With its curvy body and Jaguar’s obsessive attention to detail,the XK120 emanates a unique feminine beauty; treat it like a lady and it willamply reward you. 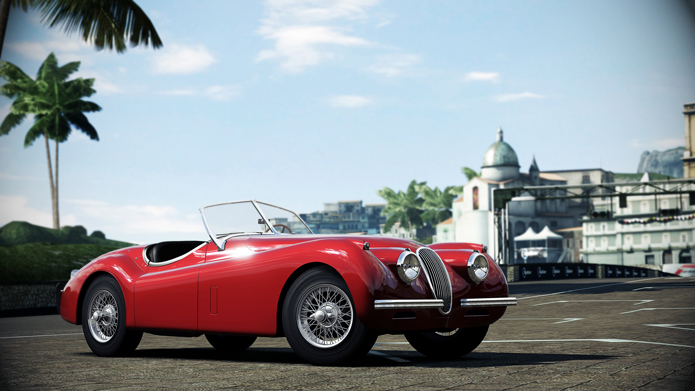 An all-new racing car for 1956, the Lotus Elevenincorporated a tubular steel space frame and stressed aluminum panels forrigidity. The car was powered by a lightweight 1.1 liter Coventry Climax engineand could hit 143 mph, and finished seventh overall at Le Mans. Fully loadedthe car weighs around 1,000 pounds. Other versioned cars had engine optionswith sizes from 750 cc all the way to 1,500 cc. In its primary 1,100 cc class, theLotus Eleven was successful on the track and was piloted by drivers such as thegreat Stirling Moss. To this day, there are few cars that can match its beautyor feather-light package.

Whenevera Mercedes-Benz model gets the AMG treatment, you can expect slick refinementand a serious power boost. TheSLK 55 is no exception. Dropping in a 5.5-liter V8 with 415 hp and 376 ft-lbsof torque is just the beginning. The sports exhaust opens flaps in the system,letting the raspy rumble of the naturally aspirated AMG V8 be heard loud andclear. The flaps respond to throttle pressure and the system can also be closedfor a more subdued ride. Variable valve adjustment, cylinder deactivation, andstart-stop technology provide respectable mileage in a car that has markedperformance. The seven-speed transmission pushes the rear wheels through aclutch pack instead of a typical torque converter for quicker, smoothershifting. The SLK55 AMG is a dressy competitor in its class, with enough optionpackages to serve those in search of lavish luxury and pure thrills. 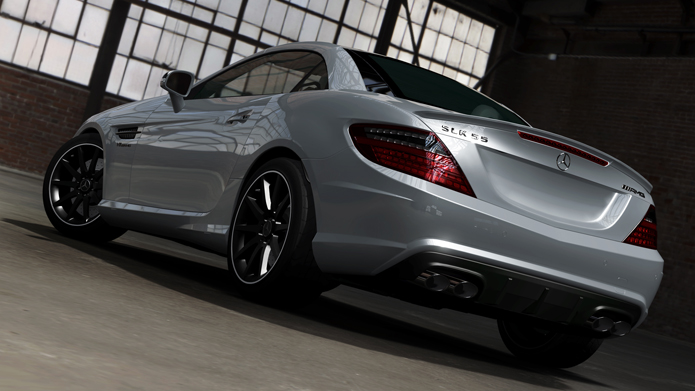 Following the release of the new 993-chassis, Alois Ruf wentto work building a new CTR that would once again sit in the upper echelons ofautomotive performance. Capable of 220 mph and 0-60 in 3.6 seconds, the CTR2’sperformance was the stuff of legend among its contemporaries. Fitted withall-wheel drive, a Kevlar body, and a Ruf-tuned 3.6-liter, twin-turbocharged,flat-six generating 520 hp and later 580 hp, the car was light, quick, andagile on any surface. To prove the car’s dominance, Ruf enter two CTR2s in thePike’s Peak Hill Climb. They were both street legal and driven to and from therace. They placed second and fourth and set the overall top qualifying time.They went on to win another twenty races, ranking the CTR2 as one of the most successfulperformance cars of the 1990s.

After the demise of the Le Mans GT1 class, Spyker hasfocused its efforts on developing a car for the new GTE class. What they haveproduced is an off-the-shelf race car that is ready to compete; just add driverand livery. The C8 Aileron’s 40-valve, mid-mounted, 4.2-liter engine produces400 hp and 354 ft-lbs of torque. Getting that power to the ground is aTiptronic six-speed automatic ZF gearbox with paddle shifters or a Getrag manualtransmission. These cars can be purchased with full-race support packages. Theprevious GT2 class Spyker claimed two second place GT2 wins in the Le Mansseries and a fifth overall in the 24 Hours of Le Mans in 2009. Here’s hopingSpyker gets the chance to match, or even beat, that performance with the C8Aileron soon.

Celebrating the release of the July Car Pack, there will bea new batch of Community Monthly Rivals Mode events launched. An event specificfor the McLaren GT MP4-12C GT3 will be offered to showcase this cars extremespeed and handling. We’ll also be awarding unicorn cars to 100 random playersper week who set a leaderboard time in the 2012 McLaren GT MP4-12C GT3 Rivalsevent.